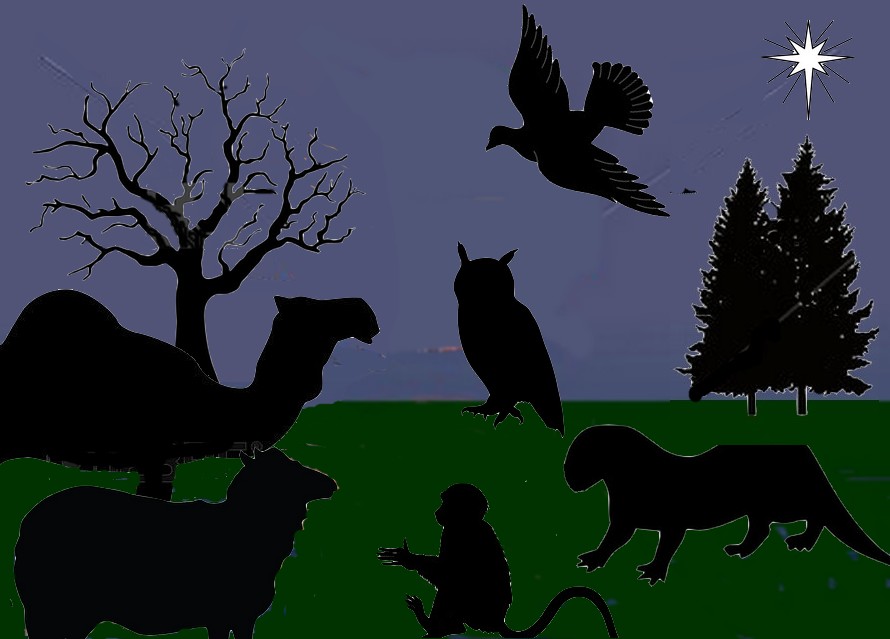 An * after a word means you can find an explanation under the fable
It was dark in the animal forest. Not ordinary dark, but pitch dark. The monkey was bored because there was no moonlight in which he could dance. The vole could not stop tossing and turning because he could not see if he was lying properly. The otter was pottering in the reeds but did not like it much because he constantly bumped his nose. It was winter dark in the forest and the animals had had enough of it.
“In difficult times,” said the owl, “you have to think of nice things to do.”
“Okay,” said the bat, who wasn’t bothered at all, “I’ll gather every-body.”
Stumbling in the dark, the animals went from their houses to the large glade around the magnolia for the comeback festival.
The eyes of the sheep darted nervously.
“You know,” said the sheep to the magpie, “with a fifth leg, I would be able to walk a lot steadier.”*
“Yeah,” said the magpie, “in this darkness, I see nothing shiny at all, let alone a fifth leg.”
In the large glade, the animals sought refuge together. To keep their spirits up, the dromedary began to sing a song. The squirrel drum-med on some mushrooms and the dragonfly was sent to the reeds by the otter to fetch a flute.
…
…
…

*fifth leg…
In Dutch we have a saying: I search a sheep with 5 legs; meaning you are looking for a person who is very versatile in their talents, asking the (almost) impossible combination of competences.

One thought on “ILLUMINATION”