Underneath a whole fable !
To order the book: webshop with English navigation 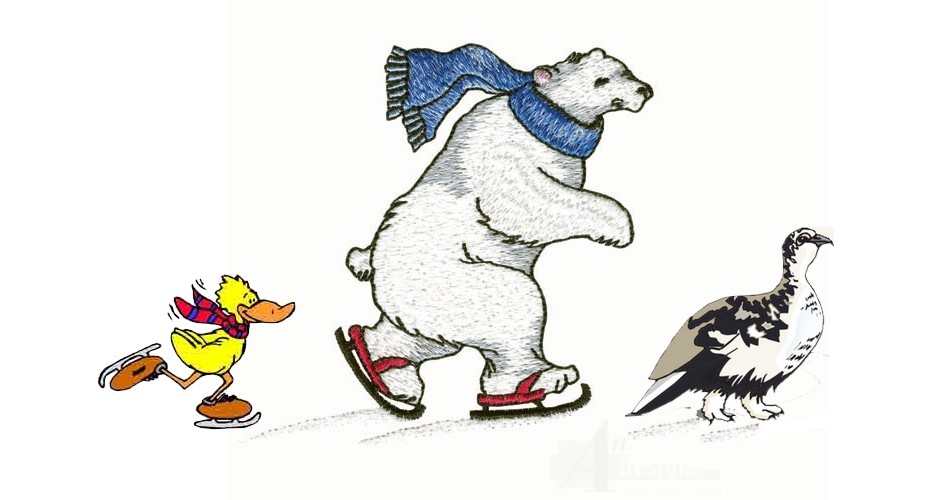 An * after a word means you can find an explanation under the fable
The animal forest was in a tizz, since it was cold. Not just a bit cold. Very cold. The dragonfly gasped for breath because she was stiff from the cold. The sheep was always sensitive to her lack of breath and he was happy that this time it was not caused by emotions, so he could help by offering the dragonfly a little space between the lush, woollen curls of his fur. Winter was also no big deal to him. Just leave your curls a little longer and the cold will not bother you. Sometimes it seemed to him that life would be complicated if you were not a sheep, but then again, he did not quite know what complicated was, so he gave it no further thought.
“Hello”, heard the sheep with the dragonfly in his fur. They looked up.
“Hello”, squeaked the dragonfly a little stifled and uptight but certainly not unfriendly. You ought to welcome strangers in a friendly way, even if you are somewhat uptight.
“Hi”, said the sheep also. He was never one of the quickest but certainly no less friendly than the dragonfly.
“I am curious”, said the willow grouse, because that’s who it was, “where the competition will take place.”
“The competition?”, repeated the sheep and the dragonfly while thinking very hard.
“Yes, the hellish tour”, said the willow grouse. “The rough tour * when it has been freezing and on the ice of the inland waters a competition will take place to decide who will be the first to have been at all eleven glades.” With the feathers on her legs and feet, she was totally ready for it.
“Oh”, said the sheep in his own way and the dragonfly chimed in.
“Yes, yes,” she said, “of course. It’s freezing again!”
“Of c-c-course”, said the race duck too, who stuttered a bit when he was excited.
“The magnolia”, said the ladybug, who was familiar with ice, because after all, you can also move to music on it. “Our rough tour starts at the large glade around the magnolia.”
“Y-y-yes”, stuttered the race duck, “and everyone who h-h-has had their c-c-card stamped at all eleven g-g-glades, comes back there to f-f-finish near the magnolia.”
“Not my cup of tea”, said the centipede shivering. “I would not dare to venture out onto thin ice. I’m only just enjoying being unknotted. One fall and I will be all tangled up again.”
The polar bear came swaying by. The animals enjoyed watching his big swinging steps. It looked kind of comical and he also spoke with an odd accent, but they were all in awe of him, because nevertheless, he had once finished second.
“Funny”, considered the giraffe. “All this annual fuss about the rough tour, when actually the frost is seldom severe enough to even organise it.”
“Looking forward to it, creates togetherness, whether it takes place or not”, said the owl solemnly.
And all the animals unanimously agreed that this was well-said.

This fable is based on the Dutch tradition of the Eleven Cities Tour, in Dutch: De Elfstedentocht. When the frost has been severe and long enough, the inland waters (canals, rivers, lakes,etc) of the northern province Friesland are frozen and one can skate from city to city. The province has 11 towns with ancient city rights and they are all addressed in this tour of about 200 kilometers. The first Eleven Cities Tour took place in 1909 and there have been only 15 tours thus far. It was never possible to have the tour each winter, but since the 1960’s, because of the upcoming industries (that use the waterways to drain their hot water) and economic interests (ice-breakers so that economic traffic on the waterways can continue), it became more and more rare that the tour could be organized. After the ever-worst tour in 1963, it was only 22 years later that a new tour could be organized. There were 2 in a row then (also one in 1986), but the last one we had was 20 years ago in 1997.
Whenever the winter gives frost in The Netherlands, people start talking about the Eleven Cities Tour, even if the frost is light and not long. It’s a collective commemoration of all heroism around this tour.
This is an impression of the worst tour ever, The Hell of ‘63

And here’s an impression of the Eleven Cities Tour of 1942 in which my grandfather, Berend de Jong, was a leisure rider who finished the whole tour. On this photo, you see him with two brothers-in-law. 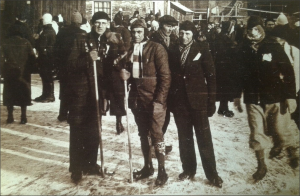 My grandfather, who managed to finish in the Eleven Cities Tour of 1942

You can continue reading about the animals in my book with fables that is published by BoekScout and can be found in their webshop.
The book is bilingual: Dutch-English and is titled:
HOE HET ZO GEKOMEN IS / HOW IT ALL CAME TO BE
psychologische fabels / psychological fables