FIRST NEW FABLE after the release of my bilingual book with 30 psychological fables. More info about my book in which you can get to know all the animals. 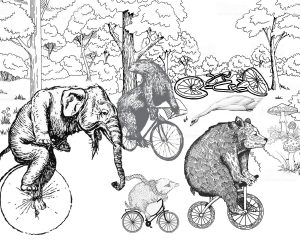 “And we’re off!” shouted the hare, that day at the start of the summer. Like every year, he had plotted a three week racing tour through the animal forest with daily stages for the animals to compete against each other.
“I hope for many long straight sections with crosswinds slightly from behind”, said the elephant, because he knew that in that case there would be fewer animals who could take shelter behind him.
“But no,” said the mountain goat, “I just want to go uphill, as far and as high as possible!”
“And I want,” said the vole, who was increasingly discovering what he really wanted, “bumpy, winding paths, because that’s what I can handle best.”
“There is something for everyone,” said the hare and sped off, the other animals after him.

The flying animals reported to the animals that did not participate but still were curious to know who was in the lead. Sometimes they flew too low and got in the way, or they flew close before the contestants, so someone in their wake could go a little faster. That, of course, caused complaints, because everyone should win by their own strength.

“What did you eat this morning to be fit?”, the frog asked the grumpy bear.
“Well, the usual,” said the grumpy bear, and dashed off, of course not wanting to say that he had eaten a lot of magic mushrooms. Magic mushrooms were on a list of things that you were not allowed to eat beforehand. They weren’t really tasty, but they made you go faster and you could keep that speed up for a longer period of time. However, the hare had discovered that they could also be dangerous.

The swan, who had at one time been in the lead and the first to conquer a long, high hill had, just before the summit, fallen, totally weak and faint and powerless. Some animals said it was only due to the summer heat and the effort, but the hare had seen him eating a lot of magic mushrooms, spurred by the wasp, who kept saying that it would make him win.
“What do you think of the magic mushrooms?”, the hare had then gone to consult the cheetah.
“I’ve experienced more often,” the cheetah had brought up, “that they seem good, but actually are very bad.”
That is how it came to be that they were banned.

The three weeks always ended in the large open space. For the last time giving it all you’ve got in eight raging rounds around the magnolia. The otter was good at, in all the hustle and bustle, being in the right place for an explosive final sprint. Not that he won every time; he just as often finished second, but the mood of the otter did not suffer from that, he was always up for a joke and a bit of a show.
That day had two winners. The first one to finish around the magnolia and the one who had done best when all three weeks were taken into account. That winner received a big, yellow garland and great applause. This year, it was the grumpy bear, who in fact, had won the yellow garland many times.

Then there was a party. The river hog belted out his songs and they drank their best velvety-vintage, telling each other tall tales about what had happened during the grand tour, this year and in ancient times.

The giraffe had mixed feelings about it all. Great, so much festive togetherness and you got to see some forgotten far corners of the animal forest in those three weeks. But the thing with the magic mushrooms bothered her. Why did some animals still eat them, now they had proven to be unfair and dangerous? That was detracting from the fun of the grand tour, right? But she was not the only one who suspected the grumpy bear of having eaten them anyway.
Suddenly, something dawned on her: Could it be that some animals didn’t care about that? That for them winning was more important than fun?
This was a new thought for the giraffe and one that was strange to her. For her there was nothing better than togetherness in healthy honesty.
“Too bad if it is true”, she muttered and started thinking about it again, hoping it would turn out not to be true after all.