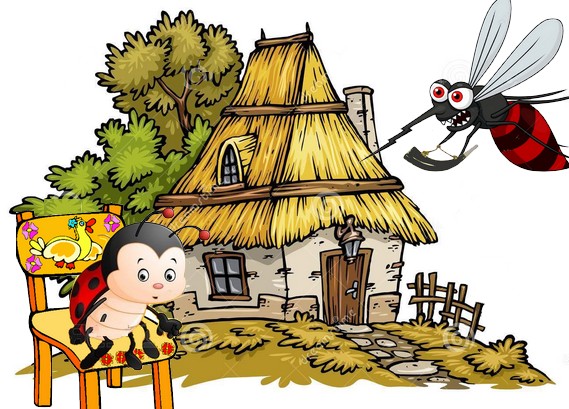 The ladybug was sitting in front of his house. He hardly ever did, since he was away so often, travelling. Now he was home though, enjoying sitting on his bench in the sun. Suddenly, he heard some buzzing. The mosquito came flying by.
Oh, no, thought the ladybug, I so much dislike that sound. It’ll only end up in something being buzzed around about me that’s only half true or not true at all.
Earlier, he used to be bothered a lot by that, because what’s not right, is not right and should not be spread around the world as truth. However, there’s no way you can straighten it all out, so now he mostly found it weird, because what’s not right, is not right and the animals who did not know him, were likely to think the oddest things about him.
“What’s with the angry face?”, said the mosquito and he whispered in the horn:
The ladybug sits in front of his house and looks angry.
Who has he been quarrelling with today?

“Hello mosquito,” said the ladybug, who figured it nicer to stay polite, “I am not angry and I did not quarrel. I have a frown because I was pondering on something.”
“Boring”, said the mosquito and flew away.
The dragonfly came flying by.
…
…
…

One thought on “UNDERSTANDING”