SECOND NEW FABLE after the release of my bilingual book with 30 psychological fables. More info about my book in which you can get to know all the animals. 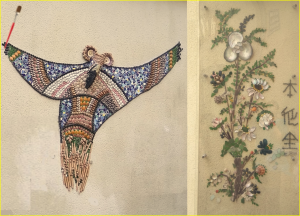 It was a warm summer’s day in the animal forest. The sun stood high in the sky, shining radiantly. Everything became golden and warm. The strange bird loved that.* On days like this, he liked to go out. He gathered twigs and leaves and berries and acorns, sometimes a glossy chestnut, and also little flowers and shells. With them, he made images. He moved everything around until the image reflected how he was feeling. And when the sun was shining so ablaze, he felt light and bright at heart. He could use that, because if the sun was not around, it would be a completely different picture, languid and heavy and dark.
“Hello”, said the sheep, for xhe was always willing to greet anyone, including strange birds.
“Hello”, said the strange bird, who sometimes did not return the greeting, during those moments when he was very focused and had totally turned inward.
“Oh no,” said the grumpy bear, who was walking by and actually did not like anything strange, “what’s the strange bird getting his feathers into?”
The mosquito, who had eyes and ears all over the place, thought it was interesting news and whispered in the horn:
Watch out, watch out!
The strange bird is on the road again.

The strange bird didn’t blink an eye; he did not even notice because he had found an interesting place and inspired, he started working. When the sun was shining, there was always a lot of yellow in his images, and the pebbles, shells, twigs and leaves formed into sunflowers, grain sheaves and …
He was busy and did not hear the buzzing of the mosquito who kept whispering in the horn:
Now what is the strange bird up to!
And he doesn’t pay attention to anything or anyone around him.

In his lodge, the otter turned off the horn and said aloud, to no one in particular, but because he thought it was important: “Leave the strange bird be. What he makes is pretty awesome. I do like those who collect and build.”
The seagull also heard the mosquito and flew towards the strange bird.
“Let them buzz, strange bird”, he said. “Hold on. Just keep doing what you have set your mind to do. Look at me, I now fly the highest of all and dare to dive the deepest.” **
“If you give yourself to the world”, said the dove who was flying by, “through what you truly believe in, perhaps one day the others will see your gifts.”
“And,” the dove added, “at least I have seen them!”
“In the meantime, I wish you strength,” said the giraffe, who always thought the images of the strange bird to be intriguing; not necessarily beautiful, but filled with so much passion, “because it’s not easy, going back and forth between adjusting to fit in, and being yourself even if you’re a bit strange.”
In the evening, the vole was tossing and turning in his den. The vole wanted. He wanted that what was inside him, would find a way out.

* The strange bird is a nod to this painter about whom I have written a reflection: A-WAY