My first 30 fables are now collected in a book !!! 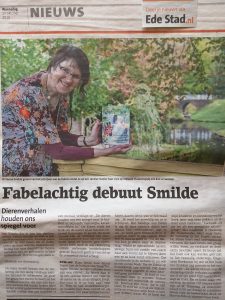 17 Oct. 2018, this interview about my book was published in the newspaper: Ede-Stad, written by Mathilde van Ravensberg who also made the photo.

Fables that make you think. Fenna Smilde from Ede likes this genre very much. For some years, she has written fables herself that she published on her website Femmka.net. Thirty of her insightful animal stories are now collected in her debut book ‘How it all came to be.’
The reader gets acquainted with the stingray who finds it difficult to meet new people, with the giraffe who likes to maintain an overview, the ladybug that makes people happy with his art. Every fable in the cheerfully decorated book by Smilde ends with an insight or a moral, she reveals. “The animals are mirroring human behaviour, we actually recognise human traits in them”.

NOD Smilde also likes to make cultural references occasionally. In one of the stories, for example, a willow grouse is going on ‘a rough tour along eleven villages’. [reference to the Dutch skating tour ‘The Eleven Cities Tour’ in the province of Friesland. Watch the footnotes to the fable TOGETHER LOOKING FORWARD] In the book she also ingeniously hid some easter eggs. The hint she gives is: look out for the seagull and the sheep.

ROWLING Her love for fables began with the books of Toon Tellegen. Smilde read his stories to a friend. “In fables you can express your vision of people and society in a playful way. I like that,” she says. When she wrapped a december present for this friend, and as a surprise, added a few self-written fables, she was taken by it. “I loved to write them. The handy thing about fables is that I can confront pure emotions directly with each other”, she explains. “You do not have to sketch a cinematic setting like in a novel. I am not all that good at that. You can go directly to the deeper layer through the animals.” After she had recovered from a heavy burn-out, a coach advised her to continue to do what she liked so much: writing. That resulted in the website and now also in a first book.

FIRST BOOK The fact that she is publishing her first book at a relatively late age (58), is no problem for her. “I do not have to be famous. Of course every writer would want to be the new J.K. Rowling, but that is not realistic. I like it when my family and friends have my book on their shelves. And I hope that my children and grandchildren later will pick up the book from time to time and read the fables aloud to each other.”

BILINGUAL “I see it as a spiritual legacy.” The book with fables is bilingual. The Dutch text is on the right, the translation in English on the left. Smilde has many international friends who also wanted to read her fables, she explains this extra difficult layout. She hopes that the book can also be used in bilingual education. Editor Boekscout, where she had the book printed, saw potential in the manuscript. “They were surprised about the depth of the stories and said that I maintain the theme well throughout the book”, she says proudly. And there will certainly be a sequel: the first five new fables are already finished. Saturday, November 24 from 11 AM, the writer will read aloud fables in bookstore Boek en Buro in Ede and sign her book.

Order the book for € 19,00 + shipping directly at Uitgeverij Boekscout: here
or email me: info@femmka.net, then we’ll find a way to get the book to you.
Please leave a review when you read it, thanks in advance !

Watch my booktrailer: here
Please take a look, that will increase my number of views.

Read the beginning of each fable in this overview: here
to get an impression of de first 30 fables on my website, which are now collected in a book.

Watch the online version of the interview on the webstie of the newspaper EdeStad: here